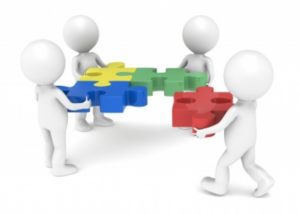 A great way to encourage club members to grow is to arrange for a Speaker, Evaluator and Table Topics master exchange program with one or more of your nearby clubs.

Each club gets to hear a new speaker and has one of their speakers receive an evaluation from someone outside their club and hears favorite table topics from another club. Both clubs get a new speaker and a fresh evaluation. Plus everyone involved has the opportunity to speak in a different setting without leaving the Toastmasters’ umbrella. We can always learn something new from other toastmasters.

This is a particularly great strategy for clubs that are struggling with membership. Sometimes having a few new people involved in their meetings can motivate members to invite additional guests or send an email to their co-workers, friends or family inviting them to visit a meeting.

As another idea. Try to make this exchange a monthly or quarterly event, or a round robin with 3 or 4 clubs. Each club involved will benefit from the exchange and it will help all clubs become stronger members of the district. 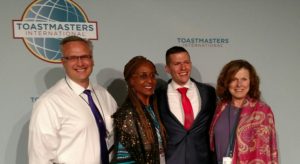 This was my first Toastmasters International Convention… so I had no clue what to expect.

Every day was filled with training, workshops, interviews and activities from 8:00 am until 10:00 pm, but we did find time to talk, share, get to know each other and bond as a team.

We met toastmasters from all over the world, supported our District 65 International Speech contestant – Jonathan Brooks and learned some best practices from some of the most successful district officers in the world.

Jonathan Brooks did a great job presenting his speech and while he did not advance to the finals, he represented District 65 with pride and excellence. There we 100 semifinalist from every area of the world and each speech that we witnessed was as good as the next.

I personally watched 40 speeches, including the top 10 finalists. I can tell you without a doubt… this Toastmasters “Stuff”… really works.

As our week was winding down, we heard word about Hurricane Harvey heading toward the gulf coast of Texas and Louisiana. Many of the district officers at the training and convention were from those areas of the United States. We were lucky to come home tired, enlightened and ready to get back to normal life.

Many of those Texans are still struggling with the aftermath of the Hurricane and it makes you feel lucky to be in Central and Western NY… where snow comes and then it melts. Aside from hurricanes, wildfires, tornadoes and mudslides, many toastmasters from other countries have to deal with governmental oversight, censorship and even the military attending their toastmasters meetings. It put life, toastmasters and freedom of speech in proper perspective.

The entire trip was an experience that I will never forget and I hope each of you can attend a Toastmasters International Convention in the near future. It will open your eyes, teach you the value of freedom and build empathy and character beyond your expectations.

In the coming months, we will share many of the new marketing, club building and district success strategies that we learned.

We appreciate your continued support and help in making District 65….

Better Tomorrow Than It Was Yesterday. Thank you.